Skip to content
I know many people were happy to see the back end of 2017 and welcome the new year, bringing with it fresh HOPE. I barely know anyone who wasn’t affected by some serious challenges in 2017. Already the feeling of this year is much lighter. 2018 is a number 11 year.  In numerology the number 11 is a Master Number, as are 22 and 33, meaning it is of high vibrational frequency and works within the realms of creation. Master numbers possess great potential for learning and growth, and can bring major transformations in your life. Whereas 2017 was a number 1 year of new beginnings, with many people experiencing resets in the form of loss or change, now the transformation into what was lost gives way to our next creation. 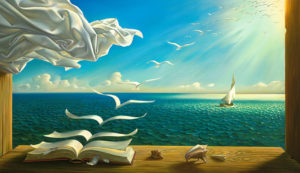 Painting by Vladimir Kush
I, like millions of others, watched Oprah Winfrey’s speech at the Golden Globes when she accepted her Cecil B. de Mille Lifetime Award. My soul was deeply touched as I witnessed the women in that room claim their power, spurred on by Oprah’s passionate stand for women who have had the courage to speak out against the powerful abusive male culture, declaring an end to the silence and a new day dawning on the horizen.  It’s amazing to be alive as a woman during this time, to see this monumental shift taking place after hundreds of years of repression and silence and submission. Now a tipping point has been reached, what has been building for so long, has finally broken free. Just like a dam bursting, allowing the waves of truth to gush forth, drenching the barren lands, so thirsty for what is right and good and true to take hold. I feel that this “Me too” movement will allow women’s voices, feelings, thoughts and ideas to be acknowledged as more credible and powerful and to be heard across all areas of life. The “Me Too” movement has followed on the heels of  the “Black Lives Matter” movement. No longer are the oppressed people of this earth;  women, African Americans, LGBT community, etc… going to sit down and take it. It is time for all our voices to be heard and acknowledged. It is a time for love to lead the way. Not to diminish the “Black Lives Matter” movement, but we all matter and we must start caring for all communities of people and accept people for who they are, and celebrate our differences.